Dart games are all about having fun. Even though professional players compete against each other for awards and prizes, most players just want to have a good time. The main purpose of darts games for them is to socialize and enjoy each other’s company. It doesn’t even matter who scores the most points. If the game is kept fun and entertaining, then everyone is happy.

The way to achieve this objective is to first purchase the tungsten making darts and dartboard. You could go with one of the great safety dartboards like magnet or electronic dartboards, or with the more professional dartboards like bristle, wood, or paper dartboards. But the dartboard that is the most fun is the electronic dartboard because it makes noises and has a lot of flashy colors to it. Best of all, the tips of the darts are not sharp. This ensures everyone will remain safe and uninjured. 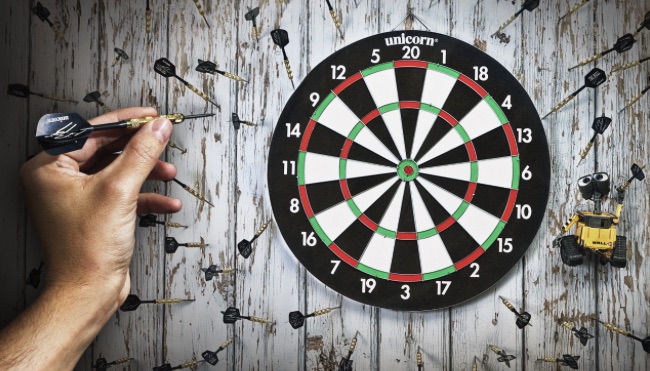 Once you have the dartboard and darts, the next step is to figure out which fun dart game that you want to play. Below is a list of the top 5 dart games which are a lot of fun.

Cricket is a casual and recreational darts game that you would play in a pub or other public setting. One of the reasons that make cricket so fun is that it is simple and easy to learn. There are very few rules to follow which makes the gaming experience more relaxing and enjoyable. The objective of the game is to aim your darts at the number 20 and then work your way down to 15. Once you strike each of these numbers 3 times, you then must hit the bullseye. The first player to successfully do this will win.

Shanghai is a darts game which is challenging in a fun way. Anyone who is a fan of baseball will appreciate the rules of this darts game. Shanghai has a total of 7 innings and each player attempts to win the most points per inning. You are only allowed to hit one particular number for each inning. So, for instance, if it is the 4th inning then everyone tries to hit the number 4 area. If they hit a double or triple in that area, then more points are scored. This is definitely a game that you could spend hours playing with your friends and family.

301 is one of the more popular darts games that most people are familiar with. The game moves fairly quickly, so it won’t take long to win if you’re good. However, it also gives other players multiple chances to win other games too. The rules are as follows: Each player begins with 301 points. Rather than trying to score more points, they are trying to score fewer points. Each dart that hits a numbered segment will deduct points from the 301 score rather than add them on. Whoever gets down to a perfect 0 score first will win the game. You can’t go into the negative numbers either. For instance, if you have 5 points left and your dart hits the number 20 segment on the dartboard, then you will not win. You’ll have to hit the number 5’s single zone to win.

Killer is a darts game which is like playing a video game. Each darts player starts off with 3 lives and a killer player who is trying to take those lives away. First, every player picks a number that is unique for them to play only. When they go to throw their dart, they need to use their opposite hand that they don’t normally play with. If their dart lands in the double zone of their number segment, it turns them into a killer. After that, the killer needs to hit the double zone of the other players’ numbers. If the killer lands their dart in this zone, it takes a life away from that player. The killer needs to take 3 lives away from each player to win.

If you like playing Golf, then you will love playing the “Around the World” darts game.  This game gives each player the chance to hit every numbered segment on the dartboard in consecutive order, starting from the number 1 and ending with the number 20. You must hit the numbers in order or else you won’t earn any additional points. Once you make it through all 20 numbers in order, you need to hit the bullseye to win. This is a fun social game to play that could take several hours to finish.