Pregnant women are typically encouraged to take a variety of supplements or, even better, to boost their nutrient intake through food sources for greater bioavailability. In response, most pregnant women will take prescribed folic acid supplements, but they may miss out on other important nutrients – especially iron, and for pregnant women, this can be deadly.

About 15-25% of American women develop anemia during pregnancy, while those rates are as high as 50% in low- to middle-income countries. With this in mind, Queen Mary University of London examined data on over 300,000 pregnancies across the developing world and researchers found that anemic women are two times more likely to die during pregnancy or shortly after delivery than their non-anemic counterparts. This research raised alarms regarding global maternal mortality rates, but considering the unusually high maternal mortality rates in the US, American women should also pay attention to their iron levels.

If you want to give your body a boost and ward off anemia, there are plenty of foods that can help. First, there’s heme iron, which comes from meat like turkey, lean beef, and oysters (although pregnant women should avoid the latter). Then there’s non-heme iron, which comes from spinach, oatmeal, beans, and even fortified cereals. Eating a balanced diet will help you get a combination of both forms of iron, and ensures your body can meet the increased oxygen demands of the pregnant body, prevent infant anemia, and reduce the likelihood preterm birth.

It’s important to note that consuming enough iron isn’t enough to prevent anemia, and that not all anemia is caused by iron deficiency. There is also folate-deficiency anemia, though this is less common in pregnant women who are typically prescribed folic acid supplements, as well as anemia caused by secondary deficiencies like B12. Without B12, your body can’t form new blood cells, leading to anemia. Adding more meat and eggs to your diet can help bridge that gap.

In addition to insufficient iron intake, doctors are also seeing a growing number of pregnant women who have anemia related to marijuana use. Though pregnant women are increasingly compliant when it comes to ceasing cigarette and alcohol use during pregnancy, marijuana use is up, and is especially common during the first trimester. Women who are pregnant or hoping to become pregnant should avoid marijuana products to protect against anemia; it can also result in low birthweight in exposed infants. 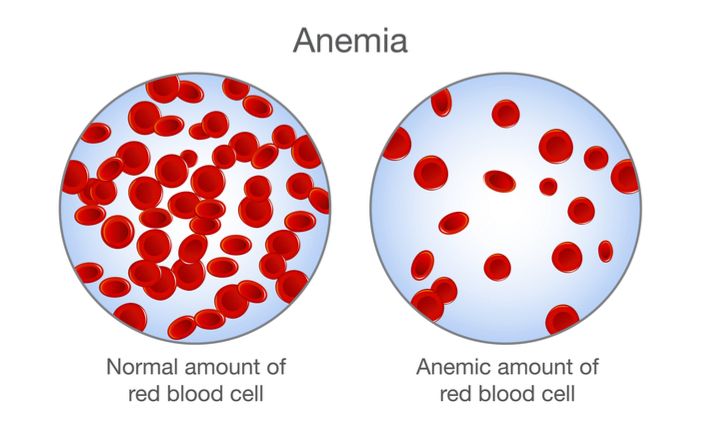 Finally, women who are pregnant with multiples, who have had two pregnancies close together, and who suffer serious morning sickness, especially hyperemesis gravidarum, are at a higher risk for anemia. All of these increase demands on the body and can make it harder to meet your nutritional requirements. If any of these apply to you, consult with your doctor to determine whether you should be taking an iron supplement

Typically, anemia causes bruising and may lead to dizziness, weakness, headache, and cold extremities, but in pregnant women, it can be much more serious, so be vigilant about your eating habits during this time. Take your prenatal vitamins, eat a balanced diet, and talk to your doctor about your iron levels. Your health – and your baby’s – depends on it.