Kala and Keira are alive and well today thanks to a hug! 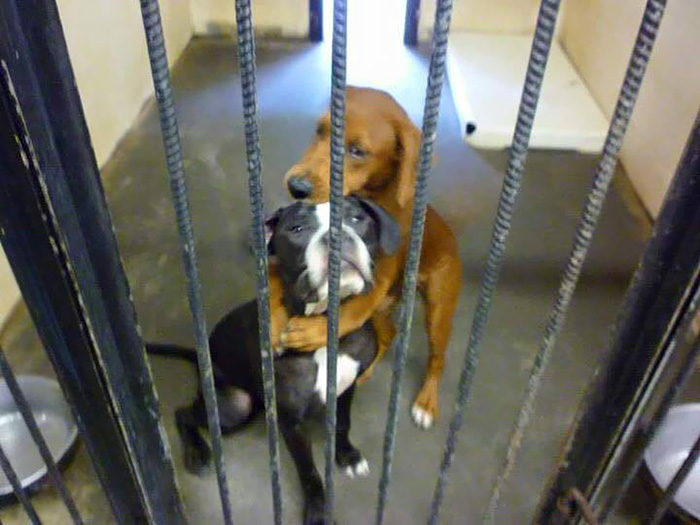 Volunteers from the organization “Angels Among Us” found out about Kala and Keira and they were on a mission to save the lives of these beauties. They took a photo of them and started sharing in on social media. The photo of Kala and Keira hugging went viral and touched millions of hearts. In just 2 hours and 6 minutes, Kala and Keira got adopted. They truly were saved by a hug!

“I’m Kala. This is Keira. We’re so scared in here. The people working in the shelters see how scared we are but just told each other that today is our deadline. We have to have someone rescue us or we’ll be “next.” Keira is black and not a “real boxer,” just a mix. She’s so brave and tells me it will be okay, no matter what happens. She tells me to be brave too, but I don’t know if I can be. Can you see our faces. Keira knows what will happen. You can see it in her eyes. She’s putting on a brave face for sure, but I can feel her heart beating fast while I’m clinging to her. If no one saves us, someone will take her away from me. I’ll see her as she goes down the hallway. She won’t come back and I’ll cry. They’ll come for me next and I won’t be as brave. We’ve comforted each other while we were here. She gave me hope when I had none. Now it’s over. Unless…”

It’s always great when animal lovers come together to save lives. Kala and Keira are now happy and well with their new owner! They’re not scared anymore!