If you haven’t planned a wedding, then you probably don’t know how hard and exhausting it can be. We’re talking about months of preparations, choosing the right gown, shoes, makeup, venue, menu, decorations… and the list goes on and on. Well, some couples want to skip the stressful planning part and be more creative than others. Ashley Schmeider and James Sisson choose a location that’s game changing. People say love can move mountains, but they’re the living proof that love can also climb them.

The couple spent the last year planning and training for their wedding ceremony on Mount Everest. No, it’s not a restaurant that has the famous mountain’s name, it’s the ACTUAL mountain. 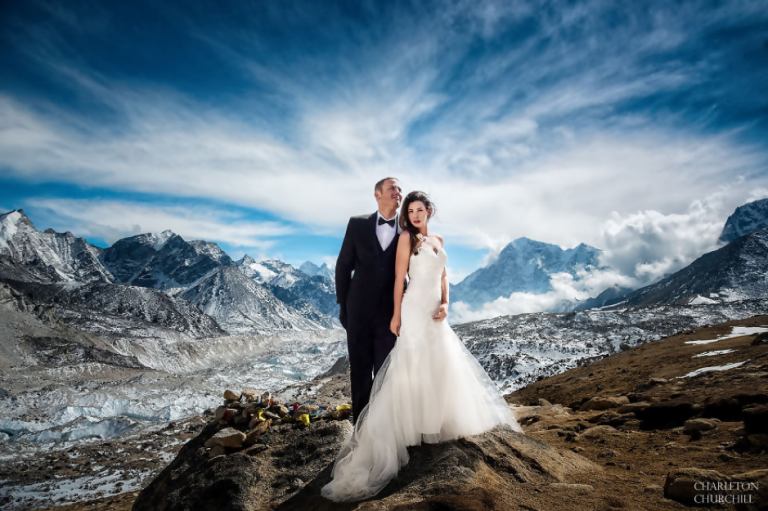 The couple never wanted a classic wedding and both wanted to get married on Mount Everest. When James pop the question, they already knew where they’re going to tie the knot.

The couple, accompanied by photographer Charleton Churchill, prepared for their climb. In early March, they landed in Nepal to start their adventure, but they soon learned that planning the trip is nothing like going through it. 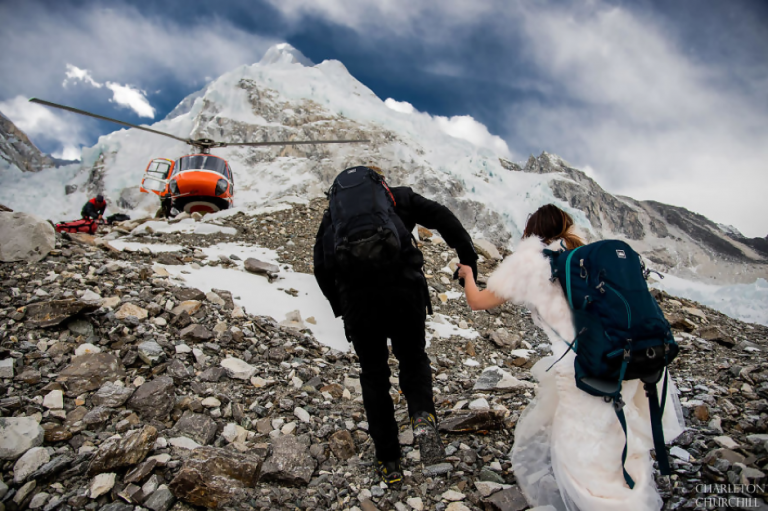 The couple and their wedding guests spend 3 weeks to reach the base camp on Mount Everest, 17000 feet above sea level. The wedding group had to face unpredictable weather, deep snow, freezing temperatures and altitude sickness together. They sure had a bonding experience to remember! 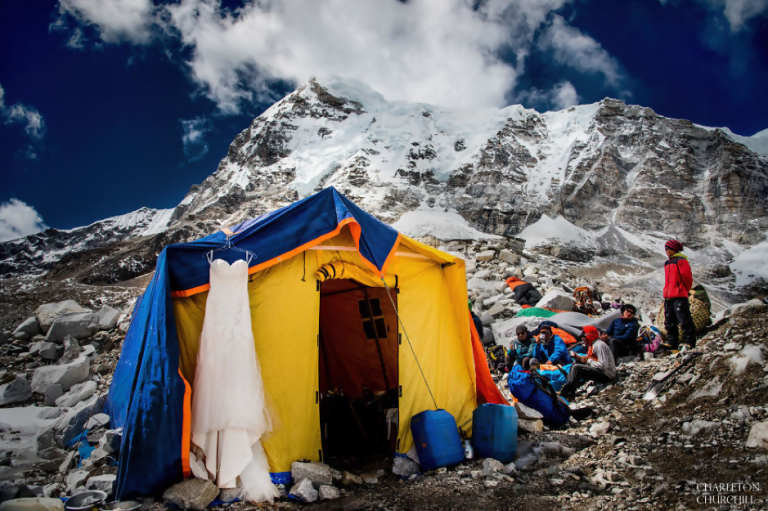 “The temperatures ranged from -8 degrees to 10 degrees Fahrenheit. So, your hands would quickly freeze if left out of the gloves, like when I tried to film and take photos. I actually had to turn a live Facebook filming off because my hands were burning cold…Also, James and Ashley married in the -5 degrees to 5 degrees Fahrenheit range, and in her wedding dress. We especially had to keep her warm… downing soup, food, drinking hot liquids, and moving, all vital,” explained the photographer. 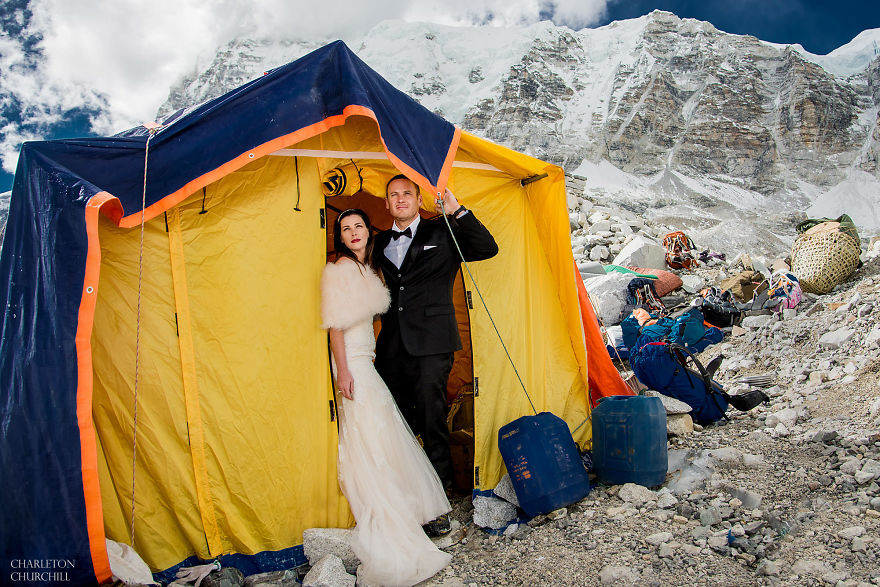 The couple is now the first couple that had a successful marriage ceremony on Mount Everest in traditional wedding garb.

“I had attempted base camp with another [couple] in 2015, but the devastating earthquake of Nepal, including the massive avalanche that swept EBC [Everest Base Camp], turned everyone around off the mountain. I wasn’t sure if I would find another couple to get married on Everest anytime soon. Both James and Ashley made for great trail partners. We were like a family. Ashley is a tough girl who crushed it on the mountain trail and maintained a great pace. 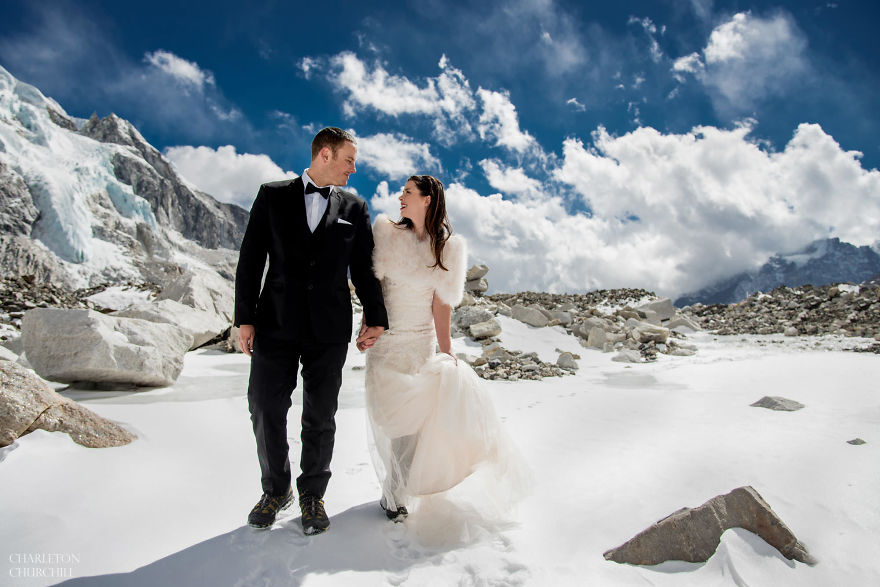 James is a great man who took care of Ashley, always looking after her needs. Plus, he’s a comedian who made us laugh often. It can be difficult after a few days on a long mountain trek with all the pressure and lack of resources to maintain a smile, but we did well,  says the photographer.

“James and Ashley exchanged vows at Mount Everest Base Camp right in front of the famous Khumbu ice-fall where people use ladders to maneuver over crevasses, and with the beautifully carved Nuptse Face in the backdrop.Their epic wedding was surrounded by all these famous mountains. It was beautiful, short, and we captured a few photos before packing and getting ready to leave.” 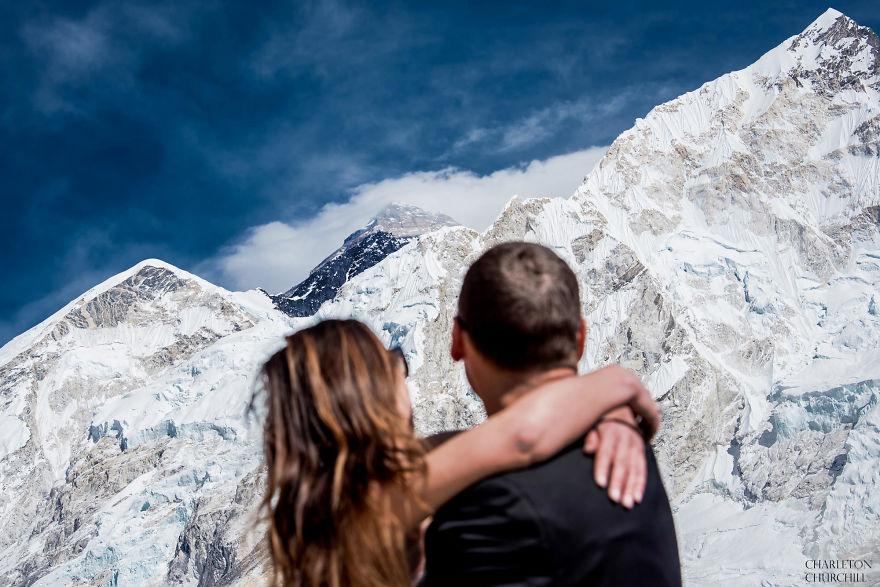 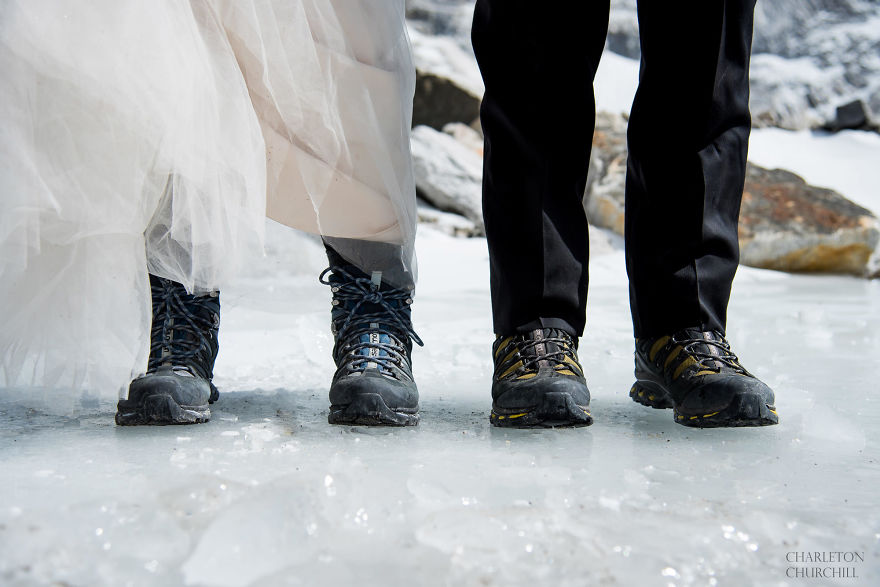 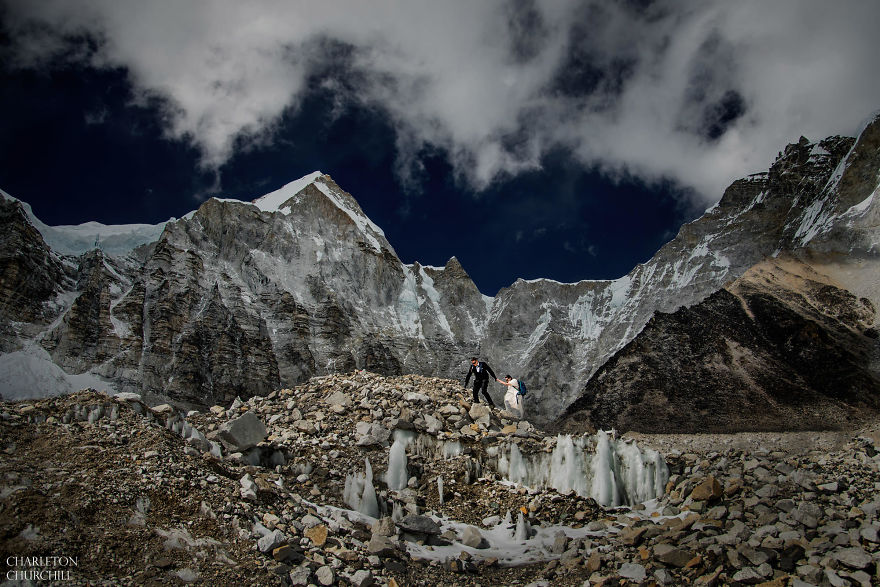