Astigmatism is one of those words that everyone has heard, but few know its meaning. Ancient Greek enthusiasts will certainly notice the etymology of the word: a privative prefix followed by the word “stigma” which means “point”.

We can therefore translate the term astigmatism into “pointless vision”, or a vision in which the image of an object is not perceived by the eye as point-like, but as a line, which makes the object blurred and without definite shapes.

Astigmatism is the consequence of a slight deformation of the cornea. Instead of being perfectly spherical in shape, the astigmatic eye has a somewhat flattened, “ellipsoidal” shape, as an ophthalmologist would say. To put it in more popular terms, the eye looks more like a rugby ball than a soccer ball. 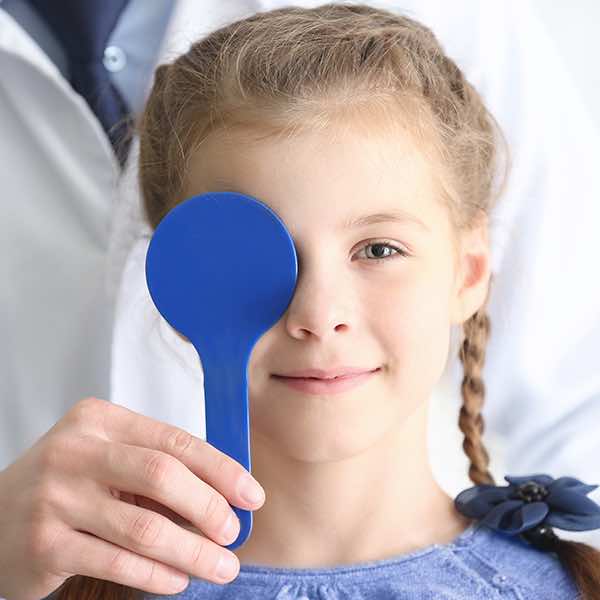 Astigmatism is a widespread refractive error, affecting people of all ages – including children. Having an astigmatic eye involves a blurred or distorted view of the images, no matter their distance. Unfortunately, astigmatism can often go undiagnosed in children. But the clues are there: for example, it can be seen that a child confuses the letters of the alphabet or is unable to focus on the symbol of a television channel even when close to the TV.

In this case, it is advisable to take the child for an eye examination: only the ophthalmologist, using an auto-refractometer, is able to identify astigmatism and measure its intensity. The pediatrician cannot ascertain the presence of the disorder with the same certainty, because they do not have the right tools.

How to correct astigmatism?

If the ophthalmologist confirms the child’s astigmatism and considers the defect to require treatment, they could prescribe a corrective tool, such as glasses or contact lenses. In doing so, it would allow the child to live a fundamental moment in their  life – the one in which the world is discovered for the first time – relying on an optimal vision. If instead the signals of astigmatism turn out to be a false alarm, at least it’d give one the peace of mind that their child has healthy vision.

In the case of astigmatism, the ophthalmologist could therefore prescribe glasses or contact lenses – that’s right, even contact lenses. There is no defined minimum age to wear contact lenses –  even 9 month babies could wear them. Surgical vision reconstruction is a whole different story, with patients advised to wait until they are 18 years old.

However, the solution to the most common childhood astigmatism is to wear glasses. But how often should they be worn? While astigmatic adults can wear glasses whenever they want, for children it is different. As their visual system is still forming, they should wear glasses as much as possible.

Over the years astigmatism can improve, because sometimes the curvature of the eye tends to normalize. However, if the defect continues for more than 5 years, it’s likely there to stay. A special case concerns astigmatism accompanied by myopia or hypermetropia: myopia tends to increase with age, while hyperopia decreases. This means that the astigmatism associated with these disorders can also be intensified or reduced.