When we were small, we were told that those tiny white spots on our nails appear because we don’t drink enough milk. Yes, lack of calcium can cause the appearance of white spots but if you notice those spots not going away, growing and keep coming back, that might be a sign that something serious is happening to your body. 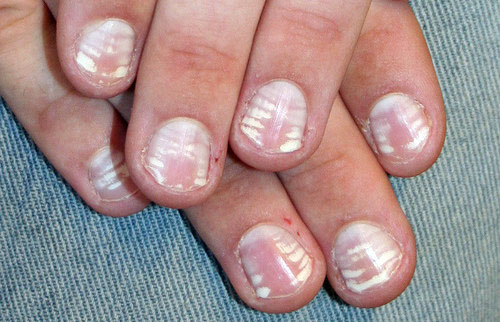 The risk is greater for vegetarians, people with kidney or liver diseases and diabetics. Some of the main symptoms include fatigue, diarrhea, lack of appetite and poor immune system.

Fungal infections are very common. Some of the symptoms include thickened nails and spreading discolored area. The white spots occur near the tip or the cuticle of nail and cause the nail to split.

Pellagra is actually a Vitamin B3 deficiency. Symptoms include nausea, scaly patches on your skin, diarrhea and inflammation of the mucus membranes.

Vitamin C deficiency occurs without any symptoms and it’s a concern for people that suffer from anorexia, diabetics and people that have frequent diarrhea.

Cirrhosis- Scarring of the Liver Tissue

When the liver is damaged, it starts to repair itself and it creates scar tissue during that process. Some of the symptoms of damaged liver care, besides white nail spots, include jaundice, itchy skin, nausea, fatigue, easy bruising, weight loss, swollen feet and ankles.

It’s a disease caused by consuming a roundworm from meat that’s not properly cooked. Some of the symptoms are fatigue, abdominal cramps, diarrhea and nausea. If the problem is not treated it can also cause headaches, weakness, muscle pain and swelling of the face.